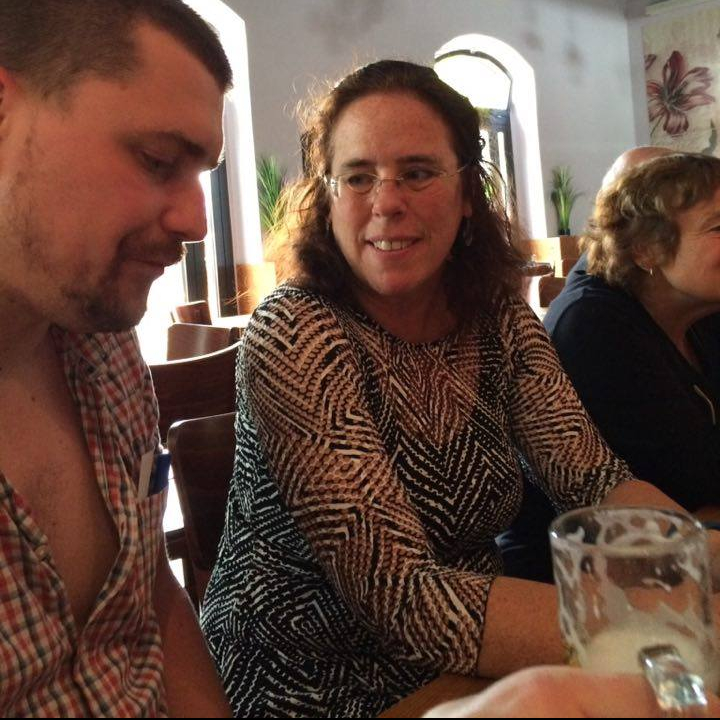 Kreuzberg, 2016. It’s a hot day in August when I first meet the one and only person who appears under her real name in Hank’s books – Marina Louise Bukowski.
I breathlessly witnessed her birth in Post Office, went for a walk to Venice Beach with her and her father in Notes of a dirty old man. I know the letters where Hank tells how her foot got into the wheel of her mother’s bike, or how he had to play Batman & Robin with her until total exhaustion. Marina is Henry Chinaski’s little daughter. And also a living person in the real world, only two years younger than my own mother.

She has been invited to a 3-day-symposium the Charles Bukowski Society is hosting in Berlin. It’s her first visit in Germany. One of the hosts – an aficionado like me – tells me that it took years to convince her of making this step. Because she’s too modest and shy to speak in front of an audience. In the end she only agreed when one of her best friends promised to travel with her.

Just like Marina I will also perform at the Symposium, where I will read my favorite Bukowski poems and stories. Of course I don’t want to wait for the evening of my performance to meet her. That’s why I show up early at the welcome party in Kreuzberg‘s Clash.

My expectations are unclear. I don’t want to pump her for information about her father like a hyperventilating fanboy. I’m not that pushy. I just want to be around her, look at her, if there’s a free and easy way to do so. Nervously I’m drinking one beer after the other. When I hear laughter approaching through the courtyard I already feel rather intoxicated. The laughter sounds loud, easy, in one word: American.

In the birth-scene in Post Office Hank writes: „I didn’t know then that she would be a beautiful girl someday who would look just like me, hahaha.“ I think about it, as I spot Marina in the middle of an approaching crowd. Her body is built firmly, she has a mouth full of shiny teeth showing a constant smile.

I don‘t dare to talk to her directly on that first evening. Instead I‘m talking to her friend Julie, who used to work with her in the same company in the San Francisco area for some years. Or something like that. I am sure listening, but the many beers and my excitement make it hard for me to follow the words..

During the whole time I‘m watching Marina, also after she joined our chat. We introduce to one another, talk about our imminent stage-acts. Her vibes are open-hearted, almost naive. But when you look at her closely, you imagine, that she‘s just waiting, observing, perceiving everything that happens around her. Not lurking like a predator, more like a creature with a highly developed shortening reaction. In one of my favorite scenes in Women Hank is being described as follows: „But your eyes – they’re beautiful. They’re wild, crazy, like some animal peering out of a forest on fire.“ Of course this can be my own projection, but I feel like recognizing the same kind of glance in her eyes.

„I‘m so nervous about my performance on saturday“, she says at the end of the evening. „I don‘t know if I‘ll dare to speak in front of all those people.“
„I‘m also nervous“, I say.
„You are? But you are a writer and have public readings all the time.“‘
„Sure, but I have always read my own stuff. Never somebody else‘s. And now I have to perform Hank‘s words of all things. I have no idea how to do it.“
„So we‘re both nervous at least.“

We say goodbye to each other with confidence. Marina doesn‘t feel all alone any more with her excitement, and I fulfilled my desire to create something we have in common. On the next day we visit every lecture of the symposium together. A Swabian doctor talks about Hanks acne conglobata. Long-time pen pal and collegue Gerald Locklin, who has also been flown in from the US, tells us about a memorable Bukowski-reading he hosted.

In the evening it finally comes to the constellation I hoped for: Marina and I are sitting at a bar table all by ourselves. The whole avantgarde of the international Bukowski-research is also present, but they‘re busy with themselves and their debates. Anyway I have the feeling the other symposium guests are much more skilled than I am, when it comes to separating Bukowski‘s life from his work.

„Are you still nevous?“, I ask. Marina shakes her head.
„Not so much“, she says. „You are all so nice. For me it feels like being with siblings in a way.“
„What do you mean?“
„You all know my father so well. He isn‘t that famous in the US. Of course everybody knows he was a writer, but… it‘s different with you. You know the same stories that I know, we can talk about it, like if we all have experienced it in the past. That‘s really special to me. You give me a feeling of being at home.“

I order another round of drinks. Marina asks me things, wants to know, what I‘m writing about. For a while we are talking like two normal people who have just met by coincidence. I really try to treat her like a self-contained person and I succeed most of the time. Still there‘s this thought which pops up in my brain again and again: My god. You are sitting here with his daughter. The real, incarnate daughter of Charles Bukowski.

„What do the others talk about?“, she asks after a while.
„Kinda shoptalk. They‘re upset because John Martin‘s violating Hank‘s legacy.“
„Why don‘t you join them? You don‘t have to look after me all the time.“
„But I don‘t care for those discussions“, I say. „You know, I don‘t know anything about literary criticism or stuff like that. For me Hank is just like a friend. I‘m not the only one who feels that way, I suppose. But there have been hard times when his books really helped me.“
„He is your friend.“
„Yes, I know, that‘s pretentious.“
„No“, she says determinately. „Why do you say that? He would have liked you for sure. If you had met, you would have become friends. I have no doubt about that.“

I don‘t answer, just let the words work on me with all their force. It‘s one of the most beautiful and terrifying moments of my life. The desire to keep hold of this moment, knowing that it will fade like all the others, that it already has faded away. I used to work in a hospice for two years, accompanying almost eighty people on their last journey. But for the first time I really understand death is also waiting for me. Happy and overwhelmed I stare into the darkness.

On the next day Marina talks for one hour at the symposium. She doesn‘t seem to have a special concept, she just shares some of her memories. For instance the fact that Hank never raised his voice against her. In his place at DeLongpre avenue he had a desk which stood in front of a corner window. She loved to look out of it.

„But I had to crawl through under a cable“, she says. „There was only one power outlet and the cable was stretched across the passage. ‚Watch the cable‘, my father always said. But of course I ripped it down to the floor one day. Hank just came into the room in that moment, and I thought he will get mad at me. But he just looked at me and said in a tired voice: ‚Marina…‘ He was always that quiet, when I was with him.“

While she is talking I have a look into the room. The whole bunch of Bukowski-enthusiasts are old, white men like he was. Loners, kind of cranky, devoted to the booze, potentially inapproachable. But they‘re all attached to Marina‘s lips as she is speaking, in some eyes I can see tears shimmering. The quiet and holy moment of last night – it happens again for all of us.

Finally it‘s time for my own stage-act. I was wondering for several weeks what I should read. My own performance-style doesn‘t fit with Hank‘s words. On the other hand I don‘t want to imitate his intonation. So I decided to read dialogue-based stories where the narrator stays in the background. There‘s much laughter, my selection hits upon a kind of surprised favor.

After the applause ends, Marina comes towards me.
„Thank you“, she says.
„But you didn‘t understand a word“, I say, as I was reading in German.
„I understood everything.“
„Really?“
„Yes, your voice… the words… I had the feeling I was listening to my father.“

We go to the bar for one last goodbye-drink. Marina‘s flight back to the US is on the next morning. Her praise still sounds in my ears. Of course it‘s to the quality of Hank‘s writing, that it is comprehensible despite the language. But for tonight I can afford the indulgence to ignore this fact. My heart glows warm and bright.

This site uses Akismet to reduce spam. Learn how your comment data is processed.